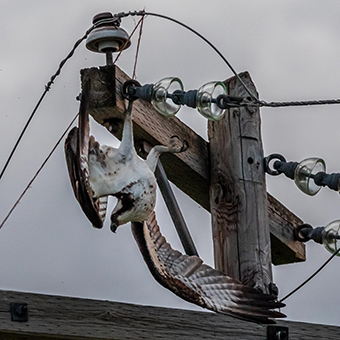 On Tuesday evening, July 21, near Dickson Dam just west of Innisfail, an osprey’s life hung in the balance as she dangled upside down, caught in some twine that had wrapped itself around a power line. In a nearby nest, her three chicks called for her. Intended as an addition to their aerial abode, the tangled twine seemed like it would be her undoing.

Fortunately, hope was on her side. Earlier that evening Glennifer Lake Resort resident Georgie Edgar happened to be driving over the dam when she spotted the osprey fly to her nest with twine around her talons and legs. She parked her vehicle and got out to take some photos and video.

“When the osprey went to fly away, she was caught on her nest with the twine, so I called the Medicine River Wildlife Centre for help and they made a call to FortisAlberta to send a lineman,” says Georgie. “After about an hour, she got free from her nest and landed on the power pole and she was tangled up in the live wires and the crossarm. I heard the live wires sizzle and began praying again for God to save her life.”

While waiting, Georgie hoped and prayed for the osprey’s safety, knowing that a wrong move could electrocute her and hanging in that position for an extended period would kill her. Watching the magnificent bird struggle for her freedom, Georgie even came up with the name “Ruth” for her, a reference to a strong and kind female figure from the bible.

Georgie also took the opportunity to call her photographer friend Bing Fountain to drop by with his camera as he had taken photos of these same osprey only a couple weeks earlier.

As nightfall set in, Ruth’s saving grace arrived in a white FortisAlberta service truck. Chris Wilson, Lead Power Line Technician in Red Deer climbed the pole and wrapped the osprey in a jacket, careful to avoid her razor-like talons while he cut her free and lowered her back down to the ground. Chris then removed the rest of the twine from Ruth’s leg, treated her cut and set her free. 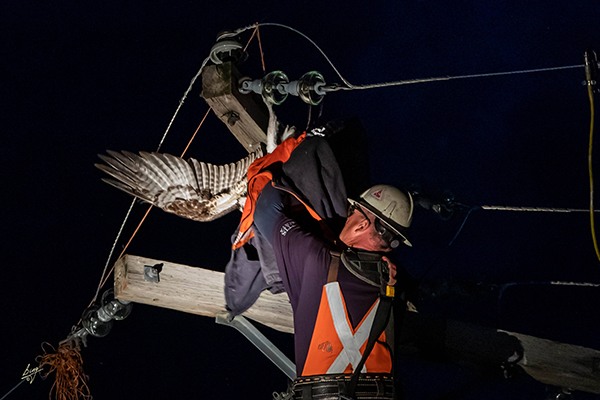 Ruth did not fly away, so Medicine River Wildlife Centre was called in and they later picked her up for overnight care at their facility. Apparently osprey see poorly in the dark and avoid flying at night, but as the new day broke on Wednesday, Ruth was again released and soared back to her awaiting little family.

Georgie was extremely thankful for everyone’s help and commended Chris on his calm demeanour, his focus on keeping everyone safe and informed during the rescue, and for his heroics in saving Ruth’s life. 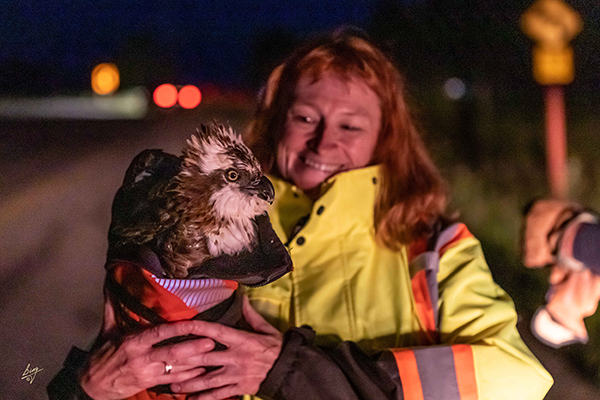 “I’m not a hero,” says Chris. “I was the one on call that night and I just did my job. Only instead of removing a tree branch from a line to restore power, it was an osprey. I’m just happy that she is alive and well.”

“With all the craziness of the pandemic and other recent hardships, this is such a blessing – I am so moved that this story has a happy ending.” adds Georgie.

Many thanks to Georgie for making sure Ruth got the help she needed and to Bing for capturing these amazing photos. To view the rest, click here. 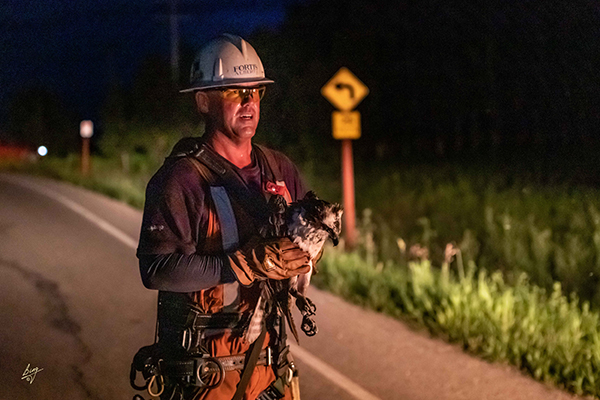 Bird interaction with energized wires and equipment is a reality that FortisAlberta regularly faces. Our Avian Protection Plan is a utility-specific plan to manage and protect migratory birds and raptors while keeping customers’ lights on, safely. When birds travel, or seek out power lines for perching, feeding, hunting or even nesting, they can come into contact with energized wires or equipment, risking electrocution. These events not only harm the birds, they increase the risk of electrical outages and fires.

To reduce interference with birds’ activities, habitats and safety, the Avian Protection Plan provides things like nesting platforms, reduced work near nests during sensitive breeding seasons, redesigned power poles, and support for our partners in education and conservation.