FortisAlberta conspicuous by our lack of footprint in Waterton

In September 2017, the Kenow wildfire decimated the land around Waterton, Alberta including 19,000 hectares of the park and 11 kilometres of FortisAlberta’s main line feeding the area. When FortisAlberta began the rebuild, we were not only faced with the challenge of cramming a nine-month project into three weeks, but also doing it in a way that would protect the land and support the regrowth of vegetation along the right of way.

“We have best practices that we follow when working in environmentally sensitive areas,” says Denis Andre, Supervisor, Environment. “During the Waterton restoration project, our crews and contractors ensured that they regularly washed their vehicles and equipment before entering the park, limited the amount of travel they did along the right of way, and used rig mats over softer terrain.”

“Because we had to wait for clearance from the authorities in charge before entering the burn area, the planning work we did during this time really set us up for success with Parks Canada and the project,” says Kevin James, Senior Manager, Operations PMO. “It gave us the opportunity to orient all of our resources on our environmental best practices before we even had a boot or tire on the ground. During the rebuild, we had a debrief each evening and a meeting each morning to improve our practices and further minimize our footprint.”

On May 29, Kevin and Denis returned to Waterton with representatives from Parks Canada to walk the right of way and review the status of the vegetation where FortisAlberta had worked.

“I was quite amazed at the regrowth and the fact that for most of the right of way you could not tell we had ever been there,” says Kevin. “So it appears like our practices were effective, with a couple exceptions where our attempts at levelling out the ground with subsoil around the pole has slowed some of the regrowth. Parks Canada had no concerns, though, and was overall very impressed with the care FortisAlberta put into conserving the local environment.”

Even though it is now difficult to tell with the naked eye, Parks Canada and the residents of Waterton will never forget that FortisAlberta was here. 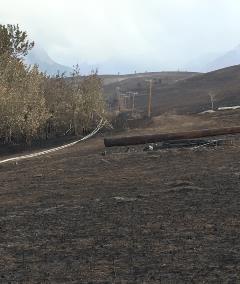