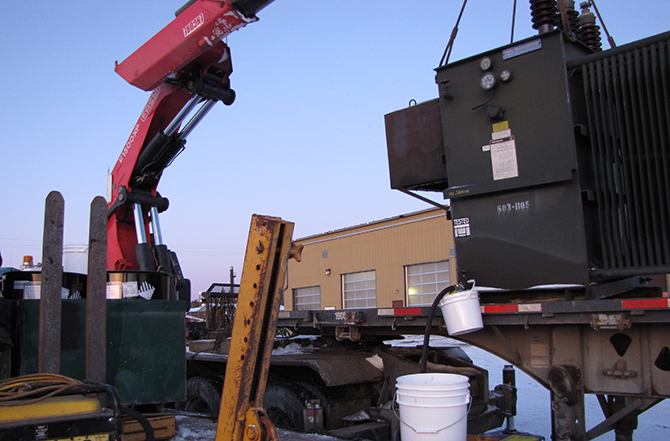 The last non-compliant transformer is removed in the Whitecourt area

On a cold November morning in the Whitecourt area, FortisAlberta achieved an environmental milestone. The last transformer containing greater than 50 parts-per-million (PPM) of Polychlorinated Biphenyls (PCBs) was removed in order to comply with Environment Canada legislation that is mandatory by 2025.

“We are happy to be compliant with this regulation 10 years before we are required to do so by law,” says Doug Skippen, Manager Environment.

Denis Andre, Environmental Coordinator, worked closely with Whitecourt employees David Pinkerton, Area Foreman and Jamie Johnson, Area Coordinator, as well as Ray Malmberg, Senior Materials Services Analyst, Acheson, to see the transformer replaced with a new one. With the help of several other Power Line Technicians and a hazardous waste contractor, the transformer was removed from a third party facility during a scheduled plant maintenance shut down. Ray Malmberg supervised the draining of the contaminated oil into drums before the empty transformer and oil were both hauled to a hazardous waste facility in Edmonton. The contractor removes PCBs from oil at their facility in Ontario and the cleaned oil is then reused in other applications. The transformer will be cleaned to remove any remaining PCBs and dismantled before it is sold as scrap metal. All PCB waste removed from the metal and oil is incinerated as a final method of destruction.

The Asset Maintenance department has managed the removal of PCBs since the program began in 2001. At that time, there were 374 transformers identified for replacement in our service area and by the end of 2010, approximately 340 of those were removed. The remainder were done by 2014 with the last remaining one at a private company site where the change had to be scheduled during a maintenance shut down.